Sometimes during spare weekends, I develop ideas and demo code for computational experiments. The idea is not to write a full deliverable application, but to make sense of data (or a mathematical model) rapidly. This is why most codes are written in Mathematica, Matlab etc. data analysis and matrix-friendly languages. Here are the links to the ones that I posted in my blog. 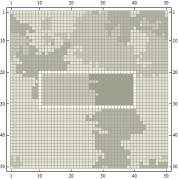 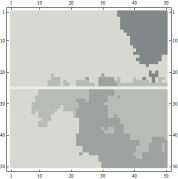 This simulation program is based on a Monte Carlo agent-based model that simulates how a new trend/fashion evolves among a group of people, and pictorially represents steady states of the system.

The article is written in my native language (Bengali). It’s based on a program I have written that generates Bengali poems using a corpus of around 1000 poems that I have collected from free online archives.

The techniques behind a simple program that I wrote. It takes in an image and outputs an image that is a “nail-carved” representation  on a wooden board.

An experiment (along with a framework) done to determine which newspaper in Bangladesh is more efficient in covering news from all regions. Usually, most newspapers in the country claim that they are “national” newspapers, meaning they cover news from all regions. In this experiment, I show that this is not the case. In fact, the two renowned newspapers leave out many regions in their news (possibly due to not having any correspondents). A few years worth newspaper data is downloaded and parsed from online archives using a program in Mathematica that automates the process. Visualization is built based on freely available shape files of regions and the Yahoo! location map API, and Mathematica.

An effort to build a timeline histogram based on newspaper data that I collected for the above project, with graphical twists added to make it look “different”. The histograms show  the frequency of news related to all kinds of crimes and accidents in every 6 months period.

In this work, I use existing linguistic and mathematical models developed by applied mathematicians to compare Bengali literature works in the past century, specially focusing on the works by the Nobel Laureate poet Rabindranath Tagore. The text data for the experiments was collected from open source literature archives.

A simple project using Arduino, but the only interesting thing is: I use Matlab to send signals to the microcontroller. In the near future, I plan to write about a few more projects that I have done using Arduino.

Is it possible to visualize a novel in an image form? Perhaps using Sentiment Analysis tools? Here, I take a (very very) simple approach to write a program that produces images from some well-known novels. The idea is to find out whether any conceivable pattern emerges that we can directly relate back to the events of the novel.